WW2 photo – can you help locate? 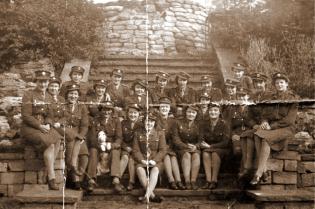 It’s clearly a rather grand flight of steps, outdoors, in a well-established garden/park area. There’s a large heap of sandbags at the top of the steps. Alongside the steps is what appears to be a rockery of some kind.

Ian also recalls his mum saying that “they were at an estate, she was in York when a chocolate factory was bombed, when the Canadians were training for the Dieppe raid Aug ‘42 and she also said she was a guard at the P.O.W. camp for the German prisoners.”

(The bombing of the factory would relate to the Rowntree warehouse near the river being hit during the “Baedeker” raid of 29 April 1942.) 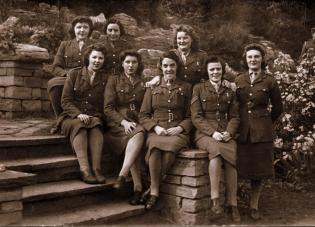 Audrey has mentioned the Prisoner of War camp on the Knavesmire in her memories of York in wartime, and Stephen remembers the ATS girls being stationed on The Mount. I can see from a quick Googling that the ATS personnel were stationed at various places and moved around a lot, but perhaps someone has more information – specific buildings they used? Or perhaps you immediately recognise these rather grand steps?

Comments welcome below. Thanks.

A few days ago a friend suggested that this photo doesn’t look like anywhere in York, and clarified my own vague doubts/queries. He suggested that the geology doesn’t fit – and I can see what he means. It would appear to be a fairly steep bank – and York is, in general, fairly flat. The stone in the background may not be a rockery of some kind, but may be instead part a naturally rocky landscape. Perhaps casting the most doubt on York as a location is the worked stone of the retaining walls – which looks a bit ‘rough’, a bit more like the kind of stone you find out to the west of York.

Despite these doubts, I’m leaving it here in case anyone at some point recognises it or can provide any further information.

By Lisa @YorkStories • 18 April 2012 WW2 To link to this page's proper location please use the > permalink.