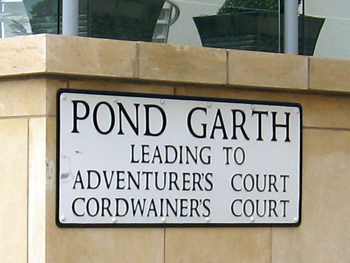 I was down in the Hungate area, having a nosey at the new bridge (more on that story later), when I noticed this street sign – for Adventurer’s Court and Cordwainer’s Court. I don’t pay much attention to signage, but I don’t think it’s that common for them to include apostrophes. Probably because it can be difficult to work out where they should go – and also because they’re not essential to understanding. St Stephen’s Road or St Stephens Road? – it doesn’t really matter, does it. In street names I often miss them out.

I once worked with someone who thought apostrophes should be abolished altogether, as they’re so often misused and misunderstood.

It doesn’t really matter, as a quick Google search reveals that all the online listings advertising these properties miss out the apostrophes altogether. Which is probably the best way of dealing with it. 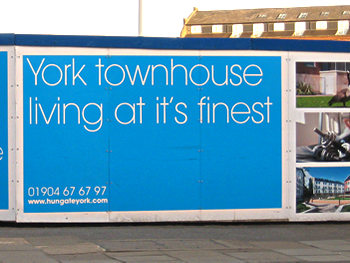 More problematical is when apostrophes are proudly inserted where they shouldn’t be. Particularly when they’re on a big sign. The its/it’s choice has caught out most of us at some time, on the web or in print (yes, me included), and we’ve all made mistakes. Perhaps not so prominent and embarrassing as this one – which did after all involve the careful consideration of only six words – on a massive roadside advert.

A now obsolete term for a shoemaker. (And not to be confused with a cordwangler.)