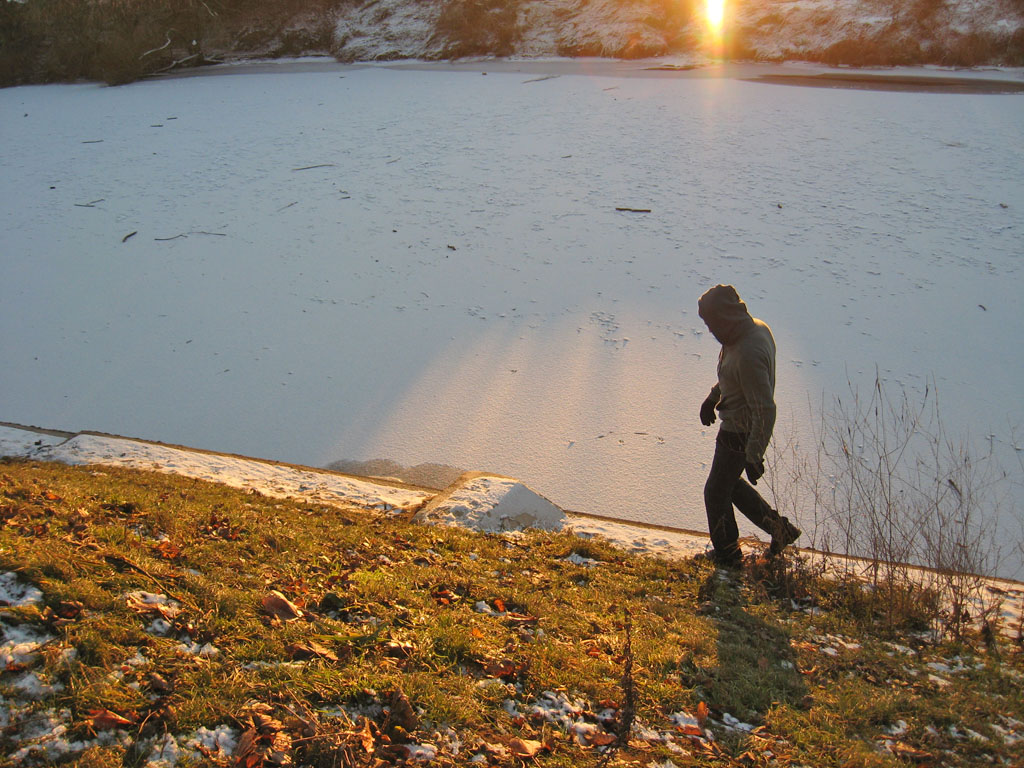 We endured hideously freezing weather through December 2010, so cold that rivers froze over in places. And we were all saying we’d never seen anything like it, this big freeze.

Of course, it wasn’t the first time the rivers have frozen. Francis Drake’s famous history of York, published in 1736, recounted the big freeze of 1607:

‘About Martinmass began an extream frost; the river Ouze was wholly frozen up, so hard that you might have passed with cart and carriage as well as upon firm ground. Many sports were practised on the ice . . . bowling, playing at football, cudgels …and a horse-race was run from the tower at S. Mary-gate-end, along and under the great arch of the bridge, to the Crain at Skeldergate postern.’

These days an iced-over river doesn’t encourage York folk to get on a horse and gallop down the Ouse, thankfully, but the local press did report what is perhaps a modern equivalent: ‘Young fools cycle on York’s frozen Ouse‘.

The photo above shows the river between Scarborough Bridge and Clifton Bridge, where most of the surface was iced over. The photo below was taken by the tower at the end of Marygate, looking past the Museum Gardens towards Lendal Bridge. 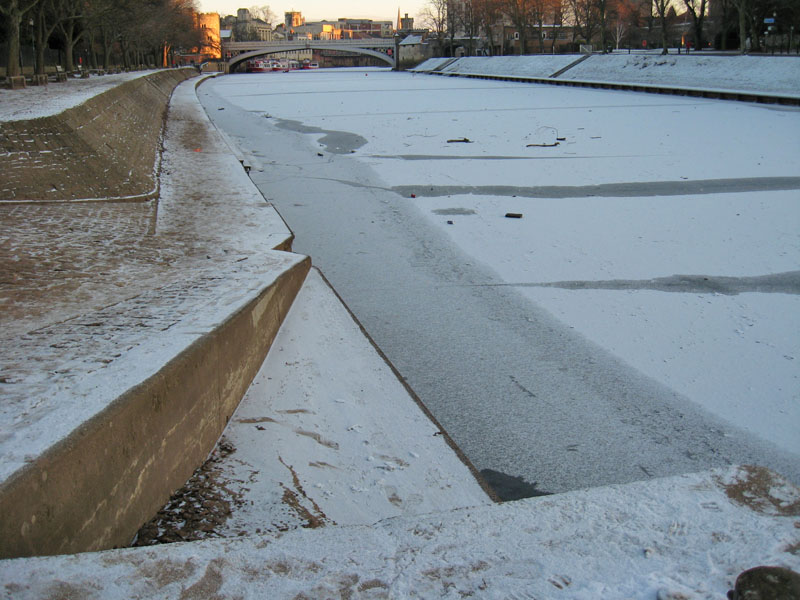 Another big freeze was recorded by William Hargrove:

‘The winter of 1784, was extremely severe, all over Europe. In England, the severity was experienced as much as in any other country; and that period was remarkable at York for a very intense frost, and a heavy fall of snow. The river Ouse was frozen so firmly, that during eight successive weeks, it was frequented by the most timid with the utmost confidence, the same as terrafirma.’

While I was taking these photos, there were people on the frozen river, but they weren’t striding across it as confidently as if it were dry land, they were right at the edge, timidly testing, two of them on a vast sheet of ice.

Once upon a time, again long ago, Thomas Gent set up a printing press on the Ouse:

‘In January 1739, the frost having been extremely intense, the rivers became so frozen, that I printed names upon the ice. It was a dangerous spot on the south side of the bridge, where I first set up, as it were, a new kind of press, only a roller wrapt about with blankets. Whilst reading the verses I had made to follow the names, wherein King George was most loyally inserted, some soldiers round about made great acclamations, with other good people; but the ice suddenly crackling, they almost as quickly run away, whilst I, who then did not hear well, neither guessed the meaning, fell to work, and wondered at them as much for retiring so precipitately as they at me for staying: but taking courage, they stoutly returned back, brought company, and I took some pence amongst them.’

Whether the local paper reported this as ‘fool prints on York’s frozen Ouse’ I’m not sure.

Our semi-solid river featured as one of the photographs in a Daily Mail story ‘Met Office knew big freeze was coming but hushed it up‘. The piece was illustrated by photos of vehicles in snow, frozen fountains, and one with the caption ‘Ducks waddle across a completely frozen River Ouse in York on Christmas Day’. The photographer had chosen a striking angle, but despite appearances the river wasn’t ‘completely frozen’ – large areas just a little further along had the ducks and geese on the usual stretches of water. This photo shows part of the river between Scarborough Bridge and Clifton Bridge. 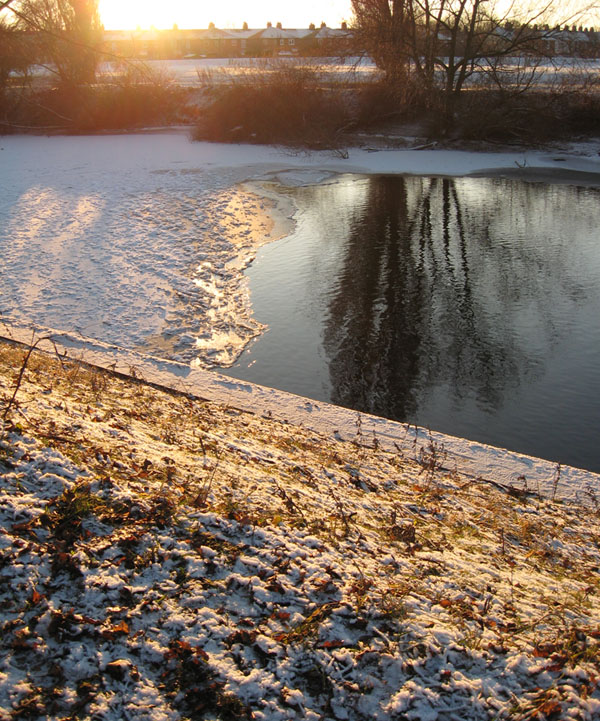 It was a relief to see the thaw. Winter of course is still with us, but at the time of writing, it’s mild, and it feels like spring isn’t far off. Let’s hope we don’t have a situation like the winter of 1614, which saw, according to Drake, ‘such a heavy snow upon the earth as was not remembered by any man then living.’ Apparently in that year it started to snow and freeze on the 16th of January and didn’t thaw until the 7th of March.

Francis Drake – Eboracum: or, the history and antiquities of the City of York (1736)