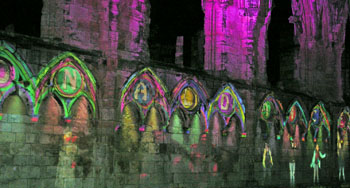 I didn’t want to go to the ‘Wonderland’ in the Museum Gardens – the ‘main event’ of Illuminating York 2012 – but have quizzed someone who did go, last night.

Before he went he’d read the comments on the Press story, which were mainly (totally?) negative. So he didn’t go with the expectations those who went on the first night maybe had.

He thought that it wasn’t as bad as those comments suggested, and that the different parts of the display throughout the gardens were interesting or entertaining enough, and ‘worth a fiver’. That the Vic Reeves part projected on the museum building wasn’t enhanced by the commentary about the images. That the younger people who were part of their party had enjoyed the dancing in front of the abbey.

I was curious about the part previously inaccessible, behind the art gallery, which I’d heard was open as part of this event. He hadn’t seen that. Whether it was because it wasn’t actually open, or because he’d missed it, I’m not sure.

There are things happening, at the Minster, Treasurer’s House, NRM, etc, all holding ‘illuminated’ happenings of some kind. There may be more venues with events this evening and tomorrow (Saturday). But many are some distance apart.

Last year the place was buzzing during Illuminating York, and one of the best aspects was that there was an open ‘central event’ – open to all, free, at the Eye of York (near Clifford’s Tower). A massive crowd stood together to watch a display on the front of the Castle Museum. In Dean’s Park near the Minster another large crowd gathered around lights and sound, again, just people freely wandering in.

This year the main event requires payment, and is ‘gated’, enclosed within the Museum Gardens. Other events are being held in other buildings. There’s nothing, it seems, for people to gather around as a community. Visitors will make the effort to come, residents who might have wandered into the city to join in and have a look seem less likely to as the festival seems to have no clear centre, apart from a paid-for attraction which has, it has to be said, been slated by many people as a disappointment, or even a ‘rip off’.

As far as Wonderland goes, think I’ll stick with remembering the ‘Big Night Out’ Vic Reeves offered twenty years or so ago, via the bizarre and memorable TV programme of that name.

More on the supporting programme in yesterday’s posting.
Or select the tag IY2012 below for other pages on this year’s festival.