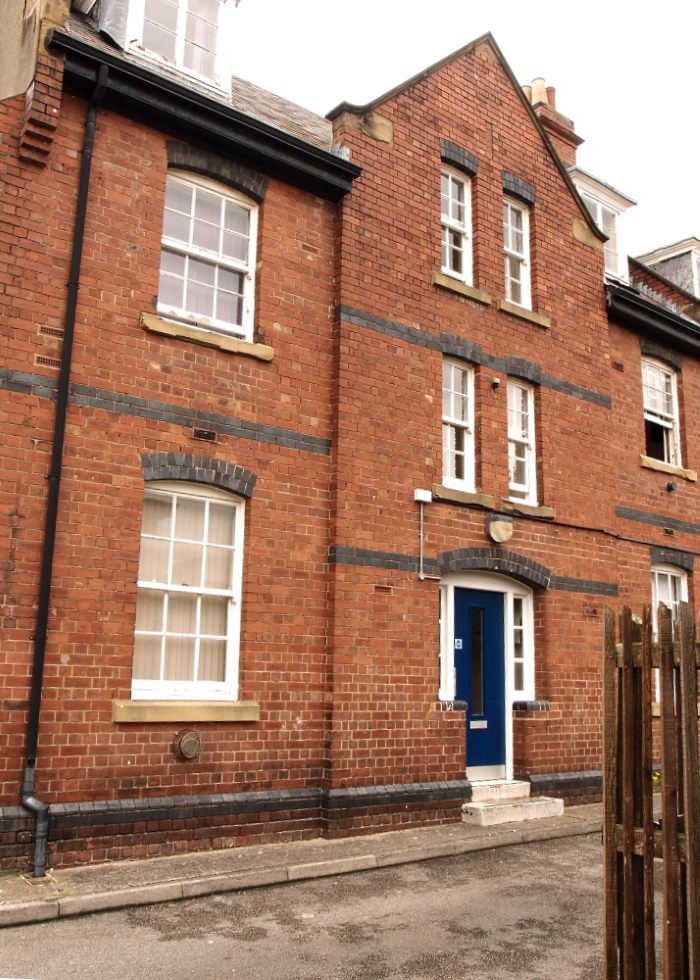 Ordnance Lane accommodation, to be demolished

The photos on this page are of a group of buildings on Ordnance Lane, off Fulford Road. In recent times they’ve been used by the council as emergency hostel accommodation. The plan now, as put forward in a recently submitted planning application and as reported in the Press, is to demolish them and erect modular buildings in their place.

The replacement buildings would be radically different. Quite ugly too, judging by the available information, compared to what’s here already. But apparently the best option, according to council reports.

Having looked at the planning application and associated reports I thought we could ponder some of the points raised, and also appreciate the history of the buildings, why they’re here on Ordnance Lane. And why it’s called Ordnance Lane.

We need to start with another nearby road name: Hospital Fields Road. So called because there used to be a military hospital here, opposite the barracks. An article on the website of the Fulford, Fishergate and Heslington Local History Society has more information on the hospital.

From the nineteenth century into the twentieth century a large area of land here between Fulford Road and the River Ouse was used for military purposes. Reminders of that history can be found near the river, in track on the river bank and an old solid boundary wall with a bricked-up opening. 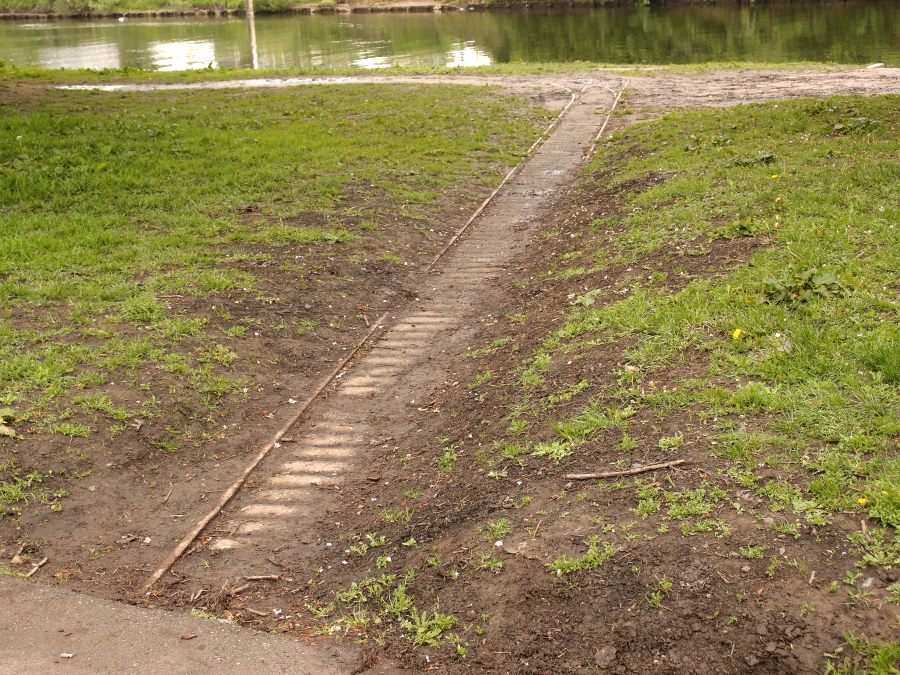 Remnant of a narrow gauge railway, used to transport military stores from Ordnance Wharf on the riverside to the Ordnance Depot

Ordnance Lane marks another corner of what was once a large military site. It’s a strange little lane, now a cul-de-sac going nowhere, on the edge of an area now largely redeveloped with industrial and office units.

On the other side, looming over the lane, are the backs of the houses of Wenlock Terrace (which I’m sure I read somewhere are the tallest terraced houses in York). They’re off camera on the left on the photo below, which shows Ordnance Lane looking towards its entrance on Fulford Road. 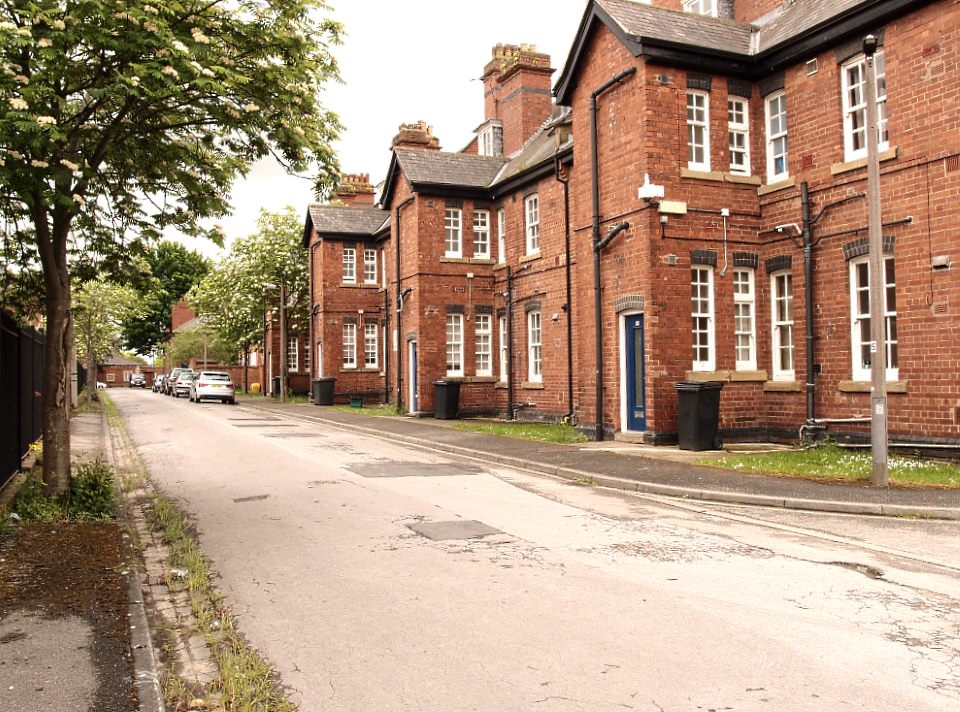 Ordnance Lane, showing the back of the ‘married quarters’ (now hostel buildings), May 2016

The buildings on Ordnance Lane have been described as Victorian, though available maps and other sources suggest that they were built in the early years of the twentieth century. One is at the top of the lane, where it meets Fulford Road, and other blocks are behind it, on a long plot.

The terrace at the far end, furthest from the main road, looks a bit odd, until you realise that you’re looking at the back of it (as pictured above). Go round the other side and it’s clear that this was the front, and that it was built to face the (long ago demolished) hospital. The photo in the recent Press reports shows the back of the buildings. From this angle they look more attractive:

They look much better from this side. Ordnance Lane buildings, May 2016

Looking at the available OS maps (accessible via www.old-maps.co.uk) gives us more understanding of the site and an appreciation of the fact that these residential buildings are a remnant of a much larger complex of buildings, all part of the hospital and therefore part of the important military history of the Fulford Road area.

An 1892 map shows the hospital, titled ‘Station Hospital’, with nothing on the Ordnance Lane site and the road not marked with that name.

By the time of the 1909 map the Ordnance Lane site has buildings on it, including the terrace of houses and the building fronting on to Fulford Road, which is also still there. There’s still no road name for the lane at that point.

A map of 1931 shows the area full of buildings, with the large site closest to the river clearly titled ‘Ordnance Depot’.  Which explains why the road here at the edge of the military land, heading towards it, is now named Ordnance Lane. By this stage the terrace of houses pictured here is clearly marked ‘Married Quarters’, alongside the large hospital building.

In recognition of their history and connection to the military presence in Fulford Road it was suggested, some years back, that all the buildings on Ordnance Lane should be included within the boundaries of the Conservation Area, in addition to the building facing on to Fulford Road which already is included. They others weren’t included, as apparently the council decided that they didn’t meet the relevant criteria. The fact that the council might want to redevelop the site had nothing to do with it, the report said. 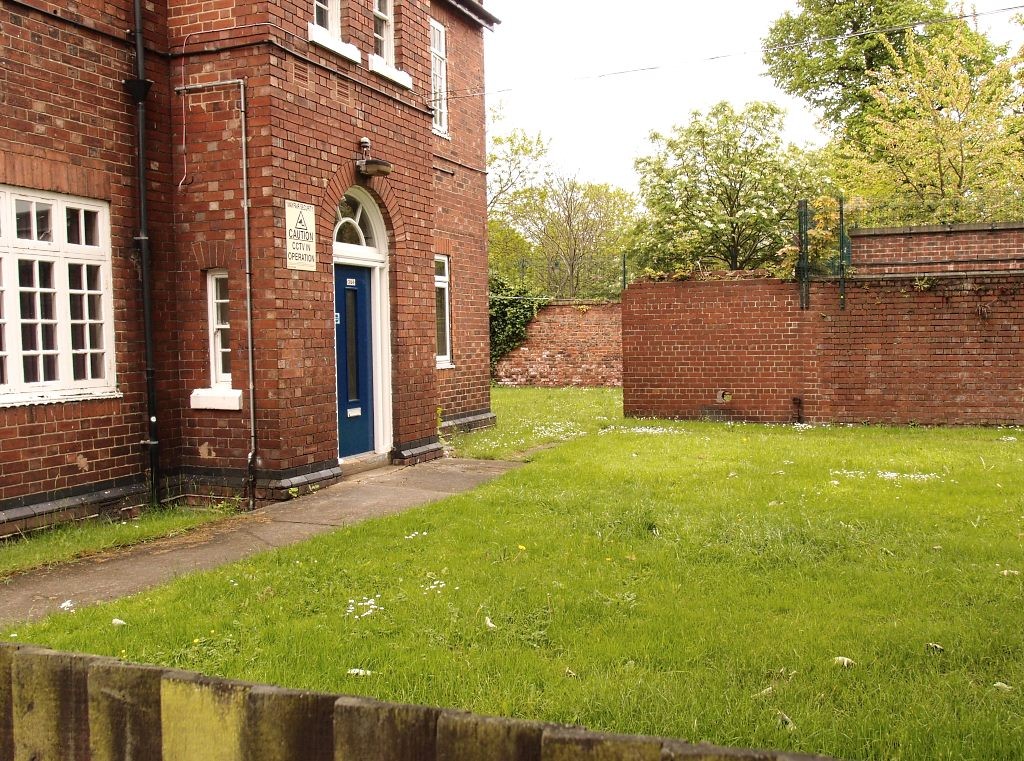 Ordnance Lane buildings, back of the block facing Fulford Road, May 2016

So now, in 2016, we’ve got one of those odd situations where the council submits a planning application to itself.

The proposed apartments will provide more appropriate accommodation which can be more efficiently managed. Also proposed is accommodation for Social Housing which will be made available for rent to Council tenants.

One online comment I’ve seen suggested that the council has been wanting to replace the Ordnance Lane buildings for around 30 years. There’s no other record of that, but it’s certainly clear from reports available on the council website that they’ve been seen as in need of repair or replacement for at least eight years.

The reports also show that many options have been explored, and highlight the difficulties with the existing buildings. (See ‘Further information’ links, below, to read more.) 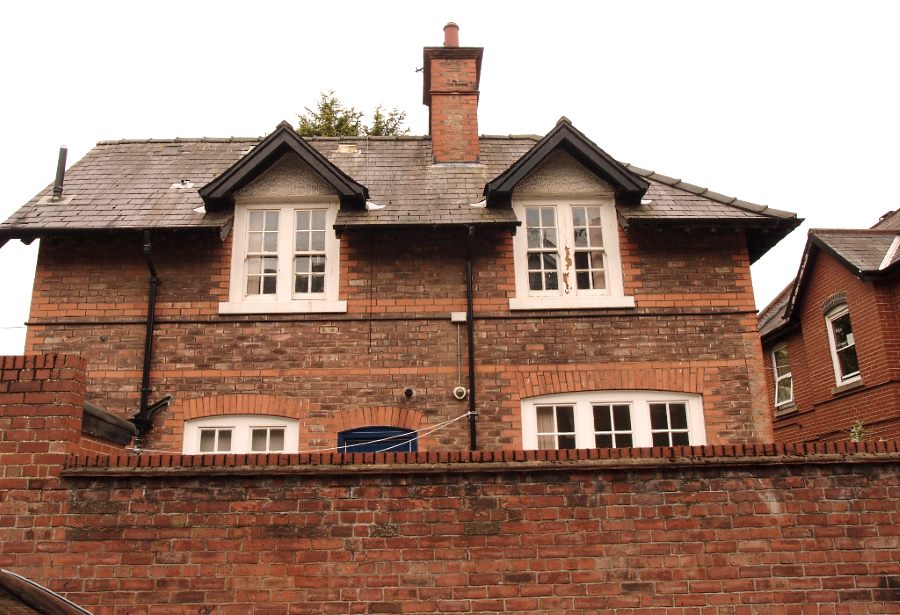 It isn’t possible to have a long period of closure of this essential facility. So the ‘modular’ build option is seen as a way to get replacement buildings constructed and in use as quickly as possible. And presumably as cheaply as possible.

Looking at the documents and illustrations submitted with the planning application it’s hard to feel enthusiastic about the proposed replacement buildings. It seems wrong to be completely wiping out the handsome and homely-looking buildings to replace them with metallic-looking boxes. 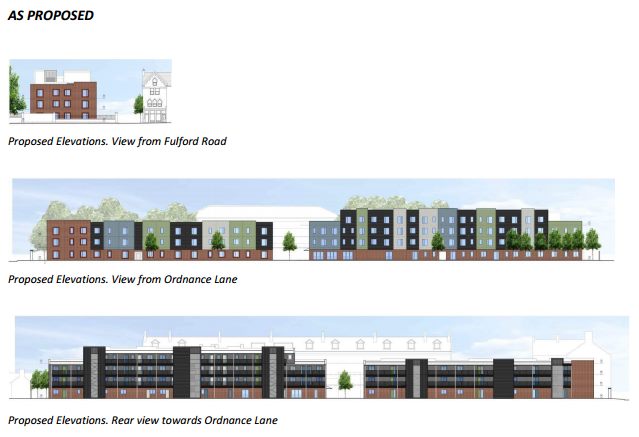 From the Design and Access Statement, prepared by WMA on behalf of City of York Council

But there’s clearly a pressing need for improved facilities, and for more social housing, and the proposals provide that. And it’s hard to find appropriate sites for social housing and hostel accommodation, and the council already has one here.

Hard to see the new constructions lasting as long as these solid red-brick buildings have, or looking acceptable a century from now. Or even twenty years from now. But anyway, do have a look at the documents and drawings, and see what you think. Not that it matters what anyone thinks. This one seems already decided, and the planning application is just a formality. That’s fairly obvious.

But, in terms of the actual build on the site, there seems to be an awful lot of grey. The materials described for the new build sound grimly industrial, and the colour palette even worse: ‘Grey’, ‘Anthracite’ and ‘Albatross’, a collection of names so evocative of miserable grimness that I didn’t know whether to laugh or cry. Further investigation revealed there would be some blue and green in there too. But also another colour called ‘Hamlet’. Grey, Anthracite, Albatross, Hamlet … doesn’t bode well, does it.

One of the things that’s particularly surprising is the apparent lack of interest from the local community. Here’s an excerpt from the rather short ‘Statement of Community Engagement': 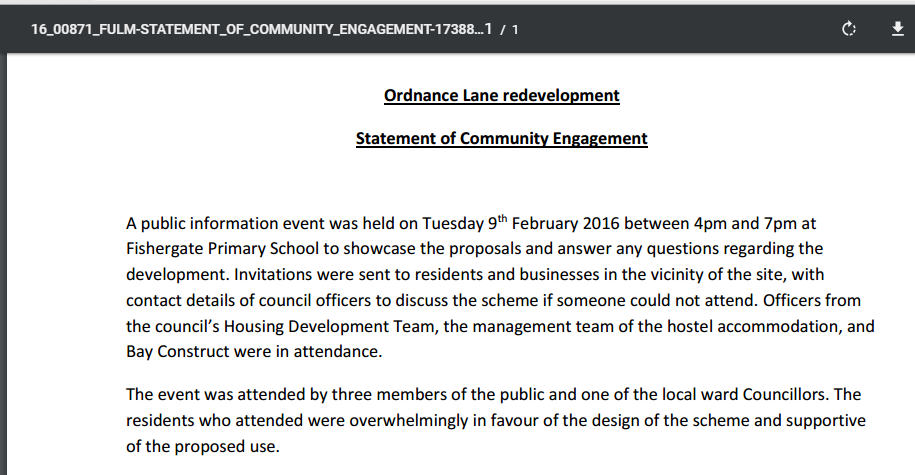 It records that four people attended a consultation event on the plans, and one of those was a local councillor.

More interest now perhaps, now it’s been in the Press. There was certainly a lot of interest on social media. Which is why I got around to writing about Ordnance Lane, having been meaning to do so for a month or more.

As is often the case when compiling these pages I find I’ve got a lot of browser tabs open with various web pages and documents I’ve been reading as part of the research. I thought I’d include them all in case they’re of interest.

Report from 2014: The Replacement of Ordnance Lane Homeless Hostel (PDF)

The barracks (and military hospital) (from Victoria County History, via british-history.ac.uk)

Record of the meeting when the above was considered: Planning Committee, 17th February 2010 including: ‘Officers also clarified that their comments for the non-inclusion of Ordnance Lane were based solely on conservation area criteria and assessment rather than on future proposals for the site.’

Character Area Statement for Fulford Road: number 65 in this list

By Lisa @YorkStories • 27 May 2016 Buildings, Planning To link to this page's proper location please use the > permalink.