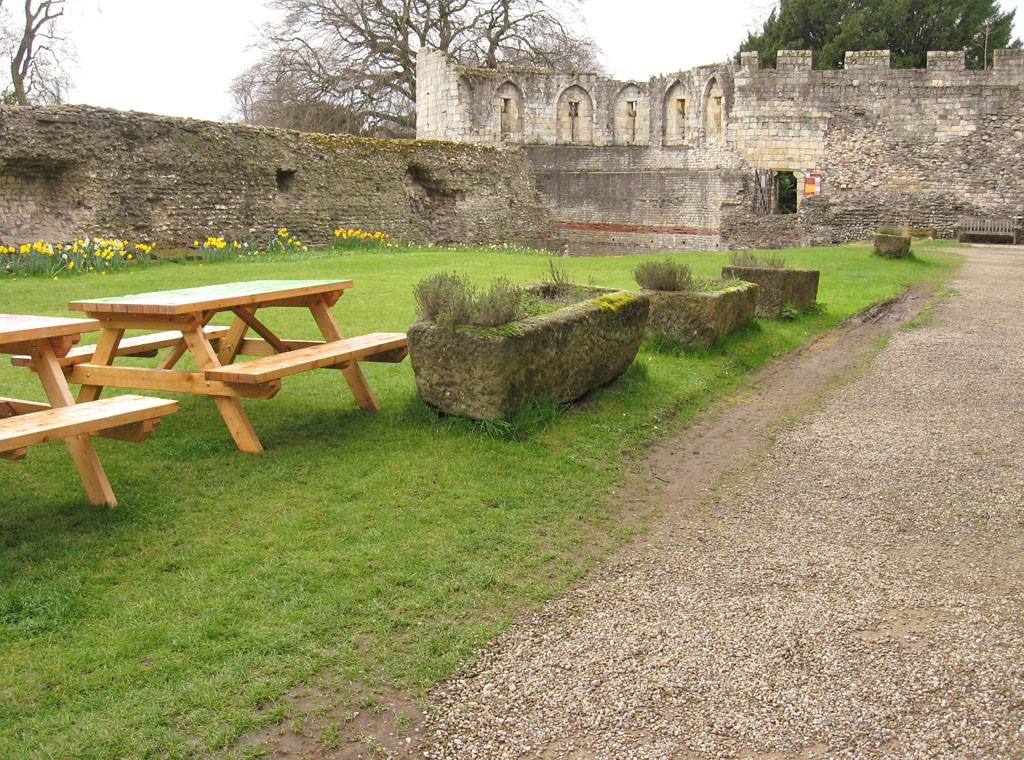 Next to York Explore, the city’s main library and archives, there’s a lawned area. It’s a place I’ve often sat for a while, on one of the benches, after visiting the library. It’s one of those ‘steeped in history’ places, very special. From the benches you look at the Multangular Tower on one side, the Roman wall in the middle, and the remains of what was St Leonard’s Hospital in the other corner. Or just enjoy the greenery and quiet.

Like all the land here in central York between the river and the Minster it has a long and complex history.

In the reports and articles I’ve been reading while compiling this page I’ve seen many references to this area being ‘underused’, ‘overlooked’, that people don’t know it’s there. The word ‘underused’ should probably ring alarm bells, as it often seems to mean that only the locals appreciate it and that it isn’t making any money, so some commercial activity is probably looming. As seems to be the case here.

There’s a nice description of this place included in documents on the planning portal:

The green colour of the grass is the dominant colour of the area, contrasting strongly with the orange brick of the library and the greys of the ruins. As a quieter secluded space from the surrounding business of the Museum gardens and shopping streets, it is used by local people in fine weather. It is enclosed and intimate and ‘off the beaten track’. 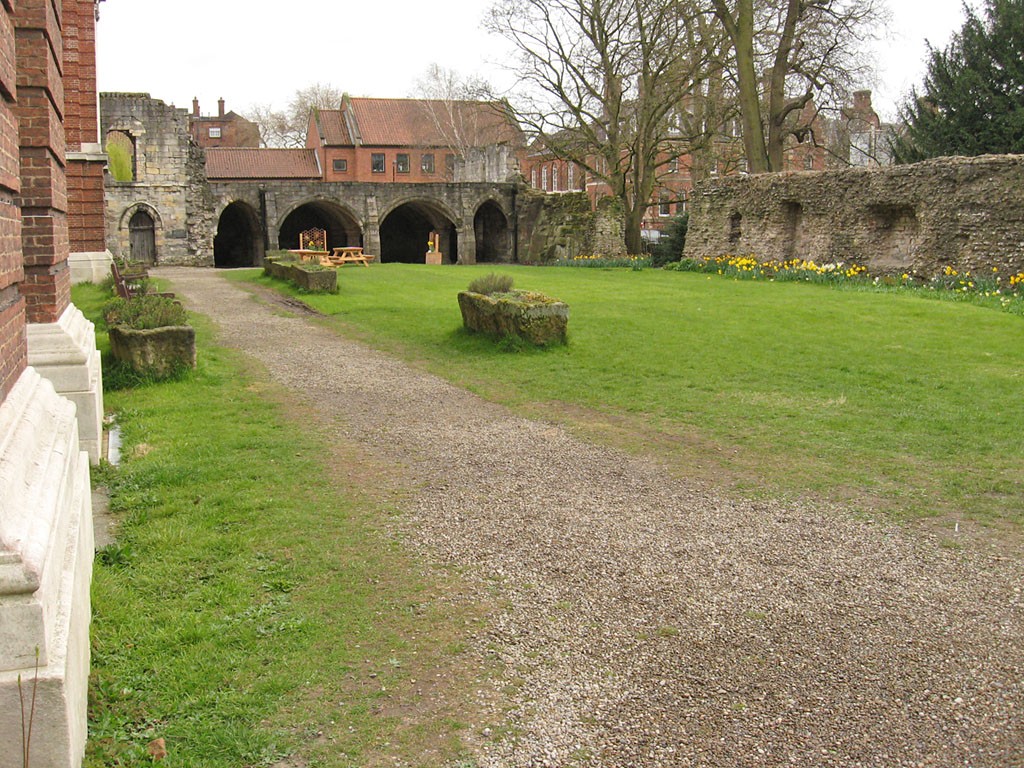 When I first heard mention of plans for a mini-golf course here I thought it was an odd and inappropriate idea, and seemed so odd that I thought it was just one of those things that wouldn’t progress any further.

But it did, and now there’s a planning application. A rather controversial one.

I’ve been reading the pre-application advice included on the planning portal, and was struck by the response from the council’s Development Management Officer, given back in March 2021, which wasn’t exactly encouraging:

In conclusion, officers advise that the principle of the development in this location would not be supported and we would not support the grant of planning permission. If however, notwithstanding this advice, you intend to submit a formal application, we would advise referencing the full advice from the conservation officer […]
Please note this advice does not negate his and our fundamental objection to the principle of the proposed scheme and notwithstanding, an improved design would similarly not be supported by officers.

Since then, and despite this rather negative response, work has clearly progressed on the application, which was submitted in December.

The presence of the mini golf course will mean that a currently much underappreciated area of York that is rich in heritage will be known and enjoyed by a wider audience, including people who wouldn’t normally visit a historic space.

It clearly isn’t underappreciated, as the large number of objections makes clear, as reported in an interesting piece by Gavin Aitchison in York Mix, on 2 Feb.

There’s plenty of information available about the significance of the site and the various buildings and structures around it, for anyone who wants to know more.

Having read some of the comments made by residents, I was interested to see what the statutory consultees had to say in response to the planning application. As with all planning applications involving sensitive historic sites and buildings, various relevant organisations are invited to have their say. And of course they have a defined remit for any objections, based on the organisation’s area of expertise.

Historic England and the Council for British Archaeology have no objections to the plans. There are no concerns about damage to archaeology, or to neighbouring historic structures. Historic England’s response states:

The mini golf proposal offers an interesting ‘meanwhile’ use for a limited period. It has the potential to serve as an introduction to the history of York, but in a different and entertaining manner that could appeal to a wide range of people and age groups. The York heritage ‘offer’ is certainly broad enough to accommodate different approaches.
(source – PDF)

Yes, it is an interesting idea, and yes, different approaches can be accommodated. But perhaps not on one of the most sensitive and profoundly interesting bits of the city centre. And this isn’t just for one summer, it’s for 7 years, perhaps longer.

I’ve been thinking a lot about why some places matter so much to so many people, and in particular thinking about that deep connection some of us feel to certain places just as they are. And why it is that other people, looking at the same place, see it differently.

This area is so historically significant and resonant that there’s probably nothing much that could ‘improve’ it as a long term intervention. Just my view. Shared by others though, I think.

I wonder how many of us who appreciate this place as it is would want to sit there in future with a mini-golf course in the middle of it. It will of course fundamentally alter the nature of the place, making it a different place entirely.

The ruins of St Leonard’s Hospital, at one side of the site, will also be utilised: 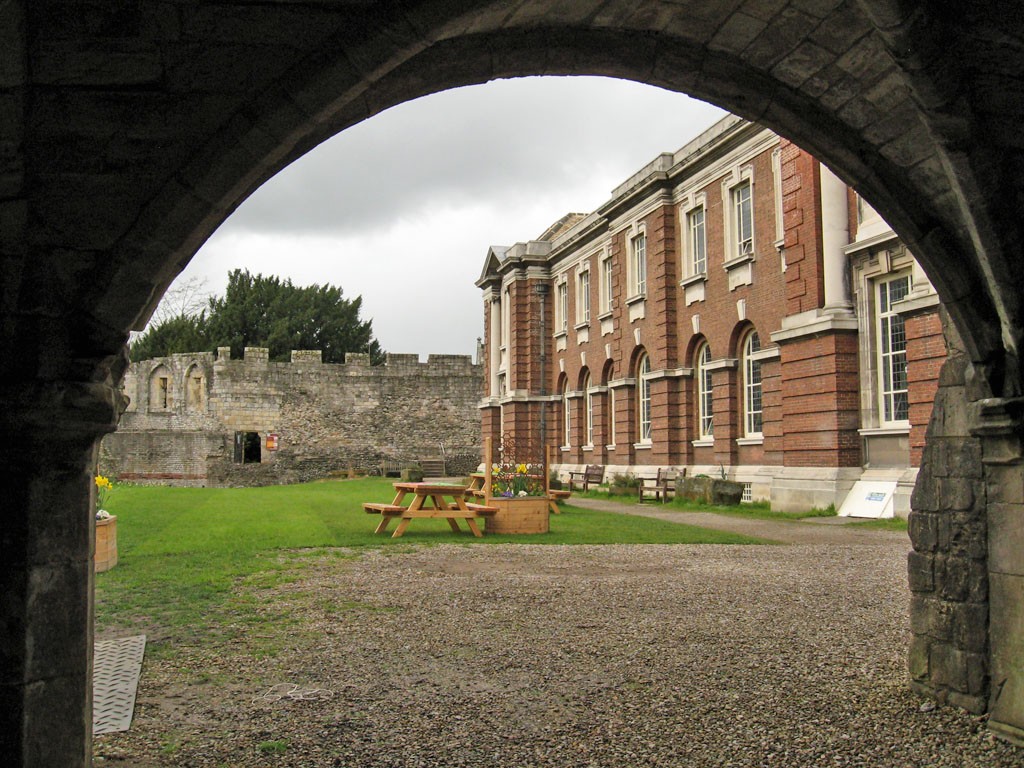 That doesn’t seem appropriate either.

Several comments on the planning application suggest other more appropriate locations. But clearly the proposed visitor attraction is intended to help raise funds for the library, which is why this location has been chosen.

Ownership, income and the ‘disposal of open space’

I’ve wondered before about the ownership and management of this area of land next to the library. It is owned by the council, but was recently leased to York Explore, as reported in York Mix in October 2020.

There was apparently a public consultation, in 2020, and advertising, as required by law, of ‘the Council’s intention to dispose of open space’.

The Section 123 Open Space notice was published in the York Press on 13th August and 20th August 2020. … Only one comment/objection was received in response to the Notice
(Library lawn lease report, 22 Oct 2020, PDF)

I wasn’t aware of this at the time, and perhaps not many people were, if only one comment was received in response.

“That approval be given to grant a lease of Library Lawn and the St Leonards Hospital Ruins (Store) to Explore York and Archives Mutual Limited (Explore) until 31 March 2034 … To allow Explore to use the space in connection with the operation of York Explore library and to sub-lease to third parties in order to generate income.”

The current planning application is presumably a result, with a third party putting forward proposals to generate income.

In July 2020 another possible ‘new flagship attraction’ was also suggested for the area, though so far only the mini-golf idea seems to be at planning application stage.

Many thoughts and queries have come to mind over the time I’ve been writing this page.

I’ve wondered what’s wrong with a place just being quiet and serious, as this place is. We all recognise the appeal of what would be called ‘fun activities’, and York is full of them, but they’re surely better placed in areas where there’s nothing much of interest there already. I’ve wondered why imposing some intrusive intervention into a place like this is seen as somehow necessary and beneficial. Why not wait for appreciation of historic places to happen naturally, as it usually does? And with so much information available so easily now, via the devices so many of us carry with us, surely it’s possible to provide more information, linked to place, in small-scale ways, for anyone wanting to understand more?

Would this not be a good place for outdoor plays, over the summer months? Like the Mystery Plays that were held in the Museum Gardens, but on a smaller scale? That could bring in income and seems to fit with the setting. Maybe that has already been considered and dismissed.

I’ve wondered too about what’s going to happen to the Anglian Tower, just behind the library, a rather magical and atmospheric place which I’ve written about before, some years back.

Maybe you have to visit at the right time to find places magical and atmospheric. Maybe I’ve just been lucky to have seen the Anglian Tower and the buildings around library lawn in particular light, at particular times, when there’s been no one else around, when the history and complexity of it is so apparent.

The kind of moment you won’t probably get next to a mini-golf course full of people.

But then of course there’s no money to be made in people just wandering through or sitting and quietly appreciating. And we have to fund our libraries somehow, as libraries too are special and important places.

Welcome to everyone who has joined the mailing list recently, I hope notification of this page has reached you. Thanks too for your ko-fi coffees, which are always appreciated, either in recognition and support of the large archive of pages hosted here on York Stories, or to power more pages in the present time. There’s a lot to cover as I try to catch up. For various reasons this page has been in draft form for many weeks, and it’s good to get it published at last. Rougier Street next I think …

Lisa @YorkStories is the creator, administrator, and writer of content on www.yorkstories.co.uk. She can be contacted on this link or via Twitter, @YorkStories
View all posts by Lisa @YorkStories →
Tagged  libraries
To link to this page's proper location please use the > permalink