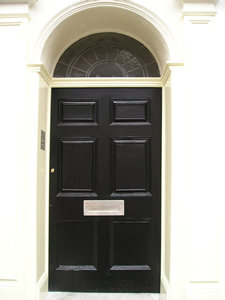 It’s a very smart black door, the front door to a building at the top of Bootham, a stone’s throw from Bootham Bar. Many old Yorkies will have fond memories of going through this door late at night, probably quite drunk and dressed in unusual garb. It’s the door to the old Roxy nightclub, once housed on the upper floors of this building, but closed long ago.

The building was offices for a while, then empty for a year or so, and just this year has been redeveloped. After the planning permission for residential use was given I was surprised that the building didn’t sell immediately. I wondered if the market was saturated with flats, and that we didn’t need any more. But we now have seven more behind this elegant door. 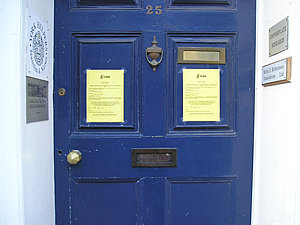 This photo, from an earlier wander (York Walks /3: Bootham) shows the door in May 2004, with its planning application notices. Compare this rather scruffy door with the remodelled door above. One thing you can say about these converted buildings, the paintwork is always impressive.

I’ve looked up this building on the English Heritage/RCHM records, which tell me that it was built in 1766.

The hopper on the rainwater drainpipe has the initials "T G", for Thomas Gilbank, who bought the house in 1768. As we can see the building has been messed around with a lot since. The cast iron decoration above the shopfronts is unusual (see photo below), and mentioned in my trusty Pevsner guide.

I remember, inside, a handsome staircase, and I wish I’d known then what I know now, as it would have been mighty impressive to go into the Roxy with one’s friends and casually mention that we should all be aware of the "original staircase with turned balusters with square knops and ramped and moulded handrail." 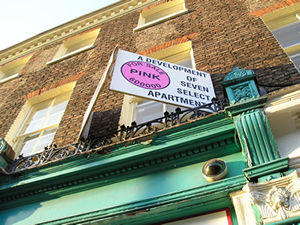 The sign says "A development of seven select apartments". I’m wondering how they’ve fitted seven in there, as I don’t remember it being a large nightclub, but perhaps the Roxy was bigger than it seemed, and it was just the fact that it was all painted black inside that made it seem smaller. And maybe the fact that it was always packed full of people with big hair, which took up a lot of space.

Even though I’m dubious about the number of flats we’re producing, I guess we’d all prefer them to be created in buildings that are already there, rather than taking up more greenbelt land. And actually this is a top spot for a flat – so near town, on one of York’s best streets, and right next to Jackson’s, our popular (must be, they have such long queues) local supermarket. And imagine living in a room where York’s finest goths used to dance to The Cult. I wonder if it mentions that in the estate agents’ particulars. I’d consider it a definite plus point myself.

As I recall, the dancefloor and the bar were on the first floor, and there was some kind of chill-out room (though I don’t think the phrase had been invented in the 80s) on the second floor. Apparently there’s another floor too – I don’t think I ever went up there. Perhaps those were the storerooms (housing the emergency hairspray supplies and other necessities). Happy days.

Thanks to Sean from Newcastle, who emailed me, and remembered the Roxy:

"You are right, the bar and dance floor (metal) where on the first floor. The second floor was where you went to get away from the music, but they also showed films up there (after all, it was Derek Brown from Brown’s Video on Gillygate who ran it). I also seem to remember that on the second floor, apart from the loos, there was a snack bar that never opened. Thursday was Gay night, Friday Goth / Alternative and Saturday ‘Trendy’ night. Towards the end Casanova’s took it over and I remember not being allowed in because I was wearing DMs and ripped jeans. Happy days!"