Helping Carecent, and a brave leap 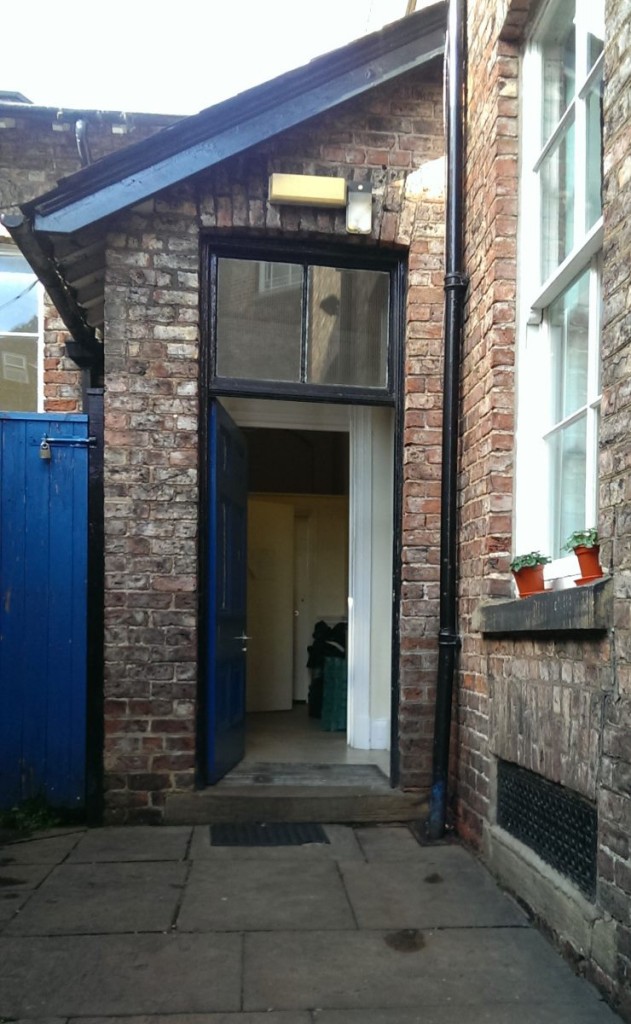 Behind the impressive grand frontage of the Central Methodist church on St Saviourgate, down a passageway alongside it, is the entrance to Carecent:

a breakfast centre for all homeless, unemployed or otherwise socially excluded members of our community. We provide food, clothing and fellowship in a friendly and non-judgemental environment.
(Carecent website)

It depends entirely on donations — of food, clothing, volunteer time, and of course financial donations.

Here’s the link to the donation page.

I’m hoping that we can help Desmond reach his target. The jump takes place quite soon, on 2 October.

I’ve been wanting to publicise this since reading about Desmond’s story in the Press last month, how he’s turned his life around.

I had a couple of queries so contacted Nicky Gladstone at Carecent. She’s confirmed that the claim in the headline, ‘8 bottles of brandy a day’ was a misunderstanding/misquote, and that it should have read 8 bottles of sherry. Still quite a lot of alcohol, yes, but as Desmond’s fundraising page explains:

‘I’ve been an alcoholic for many years, and now I’m in recovery. Carecent has helped me tremendously when I was homeless, and now I’ve got somewhere to live I’d like to give something back.’

I met Desmond one evening in 2014, when walking through the market. I’d never met him before, didn’t know that he’d been dubbed an ‘an absolute blight to the city centre’ by the local police because of numerous incidents in the past. He seemed quite charming to me, on that occasion. Drunk and troubled, but basically a nice guy, stuck somewhere he didn’t want to be, looking for a way out.

So I was so pleased to read that he’d turned things around, got help, that Carecent, and other organisations, had helped him.

Carecent needs donations of food and clothing as well, so if you’re not able to donate financially perhaps have a look at the list of needs for autumn 2016 (PDF).

I can see, from my wanders over the years, and in particular in recent times, how York has become in many ways a gentrified and affluent place, with expensive bars and restaurants and with many residents and visitors wealthy enough to frequent them regularly. But also apparent, in stark contrast, is the growing number of people who seem to be struggling to survive, sleeping in doorways, numbing pain with alcohol, needing the kind of help that places like Carecent provide.

25 years ago when we set up Carecent we might have imagined we were providing something which would not be needed for too long. The opposite has proven to be the case.
– from a blog written in 2010

Carecent has been around for more than 30 years now, and seems to be needed as much as ever, maybe more than ever. So I hope, dear readers, you can help support it. Perhaps by supporting Des’s fundraising jump in recognition of his bravery and strength in turning his life around, and because it will also mean a lot to the people who helped him, and assist them in helping others in the future. (Because, as discussed on an earlier page ‘it’s all connected‘, we’re all connected.)

Several articles have appeared in the York Press over the years giving an insight into the valuable work at Carecent:

And from Nouse, the University of York publication: Feeding the community (25 Nov 2014)

Lisa @YorkStories is the creator, administrator, and writer of content on www.yorkstories.co.uk. She can be contacted on this link or via Twitter, @YorkStories
View all posts by Lisa @YorkStories →
Tagged  homelessness
To link to this page's proper location please use the > permalink